hath the oddest frame of sense

The last veteran of The Great War, Florence Green, a British citizen and member of the Women’s Royal Air Force, passed away in 2012 at 110 years old. In fact, if you were born on the day the war ended you’d be 102 years old today, so it is difficult for most of us to fathom what life was like during WW1 and much of what did happen is confined to history books, museums and monuments.

For the town of Deseronto, though, there is still a major touchstone to that era that has remained largely unspoiled, Camp Rathbun. Camp Rathbun was one of two airfields (aerodromes) constructed in Deseronto during the First World War by the Imperial Munitions Board on behalf of the Royal Flying Corps to use for pilot training.

Nearby Camp Mohawk was west of Deseronto, and the others were Camp Borden near Barrie, Armour Heights and Leaside in north Toronto, and Long Branch and Beamsville south of Toronto. However, Camp Rathbun, unlike the other aerodrome sites, was abandoned in 1919 and aside from the occasional cattle herd the land has had very little disturbance.

This is what makes this site so special to Dr. Michael Deal of Memorial University, Professor Emeritus of Archeaology.

Deal began research on Camp Rathbun in 2017, reviewing documents and visiting the site in Deseronto, and has now received funding from the  RCAF Heritage Fund and Memorial to take his next steps.

“The main goal of the project is to do a comprehensive map of the site. We have aerial photos, but we don’t know where all the buildings are and what they are. Some we know: we know which ones are the hangars and we know the guardhouse and hospital, the sports field and where the different messes are. We also know the water tower. But there’s a lot of other buildings that we’re not sure what they are, you know, we know what buildings were there, but we don’t know which ones match the photographs,” Deal explained. 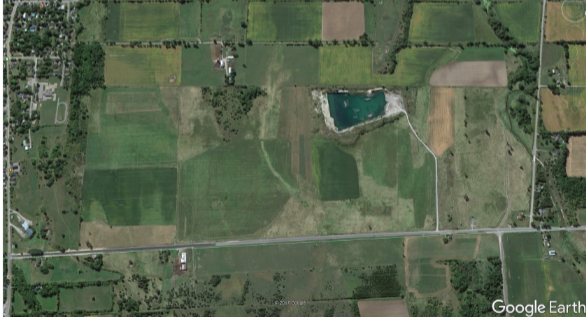 The site of Camp Rathbun today from Google Earth

Deal plans to come to the site in June with a small research team to do the mapping.

“The main goal is to do a grid survey. The foundations for the hangars, you can still see on the ground. I mean, there’s a little bit of vegetation over them. But when I was trying to poke around with a probe, you can find the corners of all the buildings and get the exact plan and with survey equipment, we can map everything there.”

He pointed out that you can see the foundations of much of the aerodrome by looking at Google Earth, “You can see brown patches, where there were buildings. There’s one huge brown patch, where we can’t see any distinctive buildings. And that’s one might need something like ground-penetrating radar to see what’s under the ground there.”

The site spans both sides of Deseronto Rd., and there are important sites on both sides, Deal pointed out. 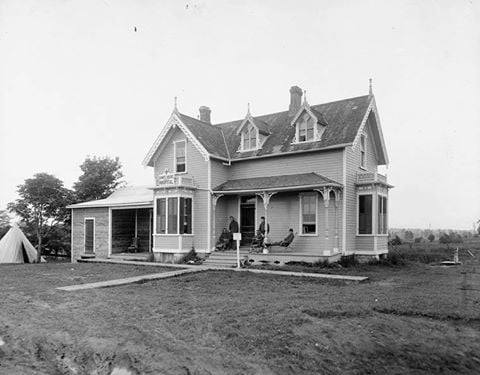 These buildings remain intact. The hospital building is now a private residence that has been renovated while other smaller buildings, are used as storage sheds and farm buildings.

Deal said, “it’s a really interesting site. I’m not sure how much subsurface excavation we will be doing. That’s kind of secondary right now. We’re just kind of curious to see what’s left of the site.

“One thing we might do is, is go over the airfield itself with a metal detector to see if there’s anything popping out — parts of planes. There were a lot of crashes at the site.”

“The dump — that would be kind of fun just to sample, you know. The owners have collected bottles that have come up over the years and they have some things from the original site. They have a stove that was in one of the messes,” Deal explained. The stove was in the barn when they bought the farm, but they didn’t realize until recently that it was from the WWI era.

“The people who lived in the hospital before, they found a cane, it would have belonged to one of the officers, probably he must have died and it got discarded somewhere around the hospital and they found it and they gave that to the current owner as well.”

Interestingly, Deal points out, “some of the original hangars are still standing, you probably know the ones on the Napanee fairgrounds.” The Lennox Agricultural Society still uses these hangars for the summer County Fair.

According to Deal’s research design proposal, “Camp Rathbun is the most important World War I aviation archaeological site in Canada, due to its potential for documenting RFC life in Canada during World War I. It is hoped that this preliminary survey will lead to a more extensive investigation of the site and the future granting of national historic site status.”