hath the oddest frame of sense

Young woman was discovered near Newburgh in December, 1984; $50,000 reward for information

Napanee Jane Doe, as she came to be known, was the victim of a brutal murder that has never been solved. After 36 years it is time we know her name.

It was a clear and crisp December day in 1984 when the body of a murder victim was discovered on a lightly travelled gravel road, just outside of Napanee, near Newburgh.

Andrew Dafoe was 16 at the time, enjoying the unusually fair weather with some friends. “We were riding dirt bikes. My parents were looking after a neighbour’s house. It was nice out, so they decided to walk to the house, back the side road.”

“And that’s how they discovered her,” he explains. “The wing of the snowplow had clipped the sod and, where it rolled the long grass back, it left the jeans exposed. That’s how my father ended up seeing it.”

The older Mr. Dafoe approached and was shocked to find the jeans contained human skeletal remains.

The younger Dafoe remembers a blur of activity. “I guess it would be a little surreal at that age, right? That’s generally not the kind of thing you expect right where you live.”

The police came and he says, “I remember them shutting the road completely down. They did a complete sweep, ditch to ditch, and they were walking shoulder to shoulder. I remember that.”

The body had been there for some time and the initial investigation determined the woman had died most likely between April and November of that year, 1984.

“There were no missing people in the local area, leading to the obvious conclusion she had been brought to the Newburgh area. We do not know if she was killed before or after she was brought to the area.” 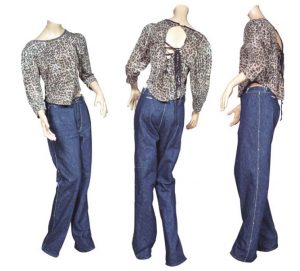 She was wearing a pair of Farini brand blue jeans with a waist size of 74 cm (28.5”) and an inseam of 80cm (31.5”), as well as a black and tan leopard-skin patterned long-sleeve blouse. These items were sold in limited quantities at various stores across Canada, investigations concluded.

DNA samples were taken from the body, but no match has ever been found.

The young woman had a very distinctive dental record, according to Dickson.

“She had dental work which included silver-amalgam restorations (fillings) to her back teeth and white resin to her crooked front teeth. A forensic dental exam suggests that she had a root canal on an upper incisor tooth on the left side when she approximately eight years old. It was restored with a metal post and had a noticeable tooth-coloured filling replacing one corner.”

This particular dental structure was so singular, it was the main element used to reconstruct Jane Doe’s face in 1989. The results, while not perfect, hoped to show Jane Doe’s unique smile, along with her outfit, and approximate size.

As technology progressed, a more advanced facial reconstruction was released in 2005. However, no one has ever connected Napanee Jane Doe to a missing person case.

“Someone, somewhere knows who this woman is. She must have family members wondering what happened to her,” says Dickson.

“Initial investigators have retired since the incident happened and other officers are assigned to take a fresh look and carry on,” Dickson said. “Having a reporter look back at one of these cases can definitely help. It could spark a memory for someone.”

Of cases that have gone cold, Dickson assures, “We continue to work through potential leads that have come in over the years. We never truly close a case.

“The OPP wants to ensure we accomplish two things: we want to help give this woman her name back — providing resolution for her family. We are also committed to ensuring the killer or killers are brought to justice.”

It has been many years since this woman lost her life. Someone, or some family, lost a daughter, sister, granddaughter or niece.

“Social media didn’t exist when this crime happened, now one article can spread the word to a much wider audience, potentially reaching someone who can help us put a name to this victim.”

Could you be the one who gives Napanee Jane Doe a name and peace after so many years?

“The government of the province of Ontario is offering a total reward of $50,000 for information leading to the arrest and conviction of the person or persons responsible for the murder of this unidentified victim.”

Any person with information regarding the person(s) responsible for this murder should immediately contact the director of the Ontario Provincial Police Criminal Investigation Branch at 1-888-310-1122 or (705) 329-6111, or their nearest police authority.

This reward will be apportioned as deemed just by the Minister of Community Safety and Correctional Services for the province of Ontario and the Commissioner of the Ontario Provincial Police.